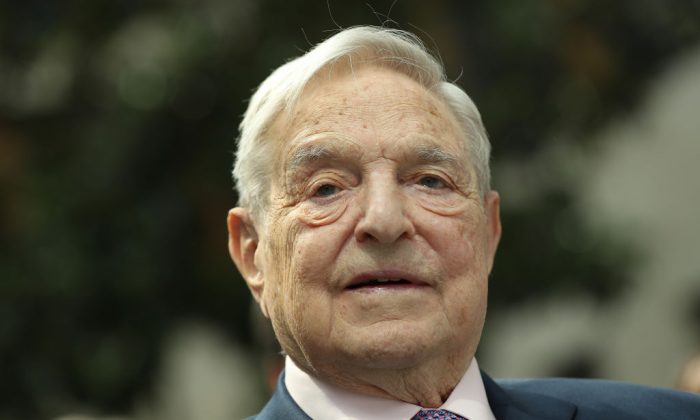 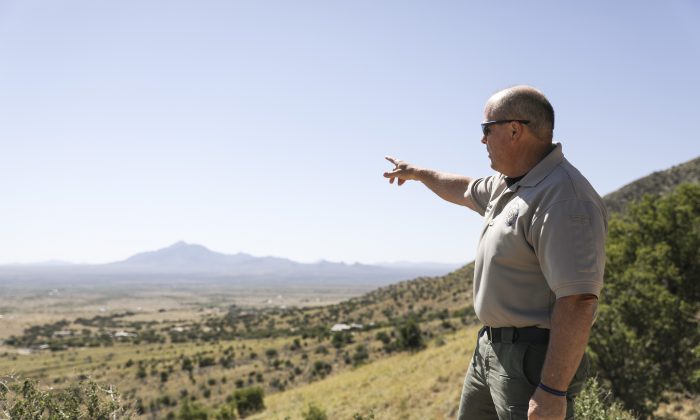 BISBEE, Arizona—Tired of waiting for the federal government to fix the border, Sheriff Mark Dannels decided to take matters into his own hands. A personal run-in with a Mexican cartel only cemented his motivation to rid his county of cross-border crime.

Five years ago, Dannels’s son, Sierra Vista police officer Justin Dannels, fatally shot a man allegedly connected to the Sinaloa cartel when the man tried to run him over during a traffic stop.

The following day, Dannels and his son both received threatening phone calls from Mexico. Then cartel members showed up in the sheriff’s backyard at midnight.

“Hell of a scary. But, I’ll tell you, if you run from them, you’re no better than they are,” Dannels said on May 5.

Instead of capitulating, Dannels doubled down on ridding his county of cartel activity and cross-border crime. Cochise County in southeast Arizona is now one of the most secure of the 31 counties along the southwest border. It is a rare success story amid an unprecedented border crisis that is overwhelming the system.

border security
A sign in Carr Canyon warning of possible smuggling and illegal immigrants in the area, near the U.S.-Mexico border in Sierra Vista, Arizona, on May 5, 2019. (Charlotte Cuthbertson/The Epoch Times)
The major new effort started in January 2017 and the formula Dannels adopted is simple: Place hundreds of cameras to detect traffickers and smugglers, catch them, and prosecute them.

“We put our cameras in areas where Border Patrol wasn’t going,” he said. “We went to the river areas, we went into the mountain areas, we went to the desert areas. And this is based on intel from our ranchers and our community folks saying, ‘We have a problem on our property.’ We’ve gone to private lands and we put those cameras strategically in areas where it helps identify the smugglers.”

The sheriff’s border team, called SABRE (Southeastern Arizona Border Region Enforcement), run by Sgt. Tim Williams, has placed 400 trail cameras in the county so far—with an estimated 700 to be up and running by year’s end.

The money for the cameras was raised from private donations—Dannels refuses to accept government money, with strings attached, to expand the program.

The SABRE team piloted a test on rancher John Ladd’s land that shares 10.5 miles of border with Mexico border—from the Naco international port of entry to the San Pedro River (which runs from Mexico into the United States).

The border line has a legacy bollard fence from 2006 that contains several sets of floodgates embedded into the bottom of it that are left open from July 1 to October 1 every year. When open, the gates leave four gaps, each about 7 feet high and 6 feet wide. The fence stops altogether at the river.

“The biggest thing that we dealt with was backpacking drugs—the 50- to 70-pound bundles on the back,” Dannels said. He said countywide, Ladd’s ranch was probably the most impacted by smuggling, but the pilot program brought it to a halt.

“There were 37 experienced smugglers [on his property] that are now sitting in prison,” Dannels said.

border security
Cmdr. Kenny Bradshaw of the Cochise County Sheriff’s Office, stands next to the floodgates within the U.S.-Mexico border fence west of Naco, Arizona, on May 8, 2019. (Charlotte Cuthbertson/The Epoch Times)
Seeing immediate success, the program continued to expand and became fully operational in August 2017.

Interdictions of illegal aliens and drugs increased as cameras caught more activity. The SABRE team has two National Guard members watching the cameras 24/7 and another two analyzing the footage and photos that are captured.

He said his team will carry out the interdiction if it’s drug smuggling; however, they have to call in Border Patrol for human smuggling, as that’s a federal issue.

The overall catch rate has increased from about 16 percent to about 60 percent, and with 100 percent prosecution for drug smugglers, Dannels said the cartel has started moving its drug operations to avoid his county.

“If we see you on camera, it’s a good chance we’re going to get you. And then you’re going to prison from there,” he said. “What we’re seeing now is not a lot of drugs, but a lot of the human smuggling, and we turn that over to Border Patrol.”

But, Dannels said, he has weathered a lot of criticism over it, especially when he started jailing juveniles.

The cartel was using juveniles to smuggle drugs—mostly through the port of entry at Naco—knowing that the federal government wouldn’t prosecute them.

“It’s not that they can’t, they don’t. They don’t have the resources, or the will, or whatever,” Dannels said. “So now we have a program where we said we will take them. Any juvenile between the ages of 14 to 17, we take them all. The 14-to-17s are remanded as adults for smuggling, and they go to prison for two years.”

border security
The port of entry at the U.S.-Mexico international boundary in Naco, Arizona, on May 4, 2019. (Charlotte Cuthbertson/The Epoch Times)
Dannels said it took about a year to almost eliminate the problem. “We went from one or two remanding juveniles charged for smuggling, to 36 a day,” he said.

“I took a beating on that: ‘You’re locking up kids.’ The consular got mad at me. Everybody got mad at me: ‘This is costing us a lot of money.’ I said, ‘Bill the cartel.’

“We’re down to one or two again. I said they’re safer in my hands than they are the cartel’s. At least they’ve got education, health, counseling, a structured life. They’re all in our prison right now, so they’ll be coming out soon. It’ll be interesting what the return on that is. I don’t know yet. … We hope they go back and find a better life.”

Most of the jailed juveniles are Mexican nationals, but a few are American citizens, he said.

“Now, they [the cartels] are using juveniles for human smuggling and I can’t do a damn thing about that [because] immigration is a federal thing,” he said.

border security
A motion-activated trail camera set by the Cochise County Sheriff’s Office captures several illegal aliens hauling suspected drugs in large backpacks on March 16, 2017. (Courtesy of Cochise County Sheriff’s Office)
The Only Relief in 30 Years
Cochise County itself shares 83 miles of border with Mexico and sits next to New Mexico. The county is one of three that fall within the 262-mile Tucson Border Patrol Sector, which encompasses most of Arizona’s border with Mexico, from New Mexico to the Yuma county line. The other two counties are Pima and Santa Cruz.

A grateful recipient of the SABRE team’s efforts is Ladd, the rancher.

“That’s the only relief that we’ve had with the drugs in 30 years,” Ladd said on May 9. “We haven’t had drugs on this ranch for … a year ago in February was the last one. And that’s never happened before. [The] men on that SABRE team have completely shut down this drug corridor.”

Ladd’s family has ranched on the land for 123 years. “We were here before the border was,” he said.

He is one of about 30 border ranchers with whom the SABRE team works closely, including by giving them police radios to call directly into dispatch if needed.

border security
John Ladd on his ranch by the U.S.-Mexico border in Cochise County, Arizona, on May 9, 2019. (Charlotte Cuthbertson/The Epoch Times)
“The last 30 years, illegal immigration has affected the way we ranch, it affected my livelihood, my personal life, everything else. We deal with it every day,” Ladd said.

Open gates and broken fences are just one of the major problems caused by illegal immigration and drug smuggling.

“We’ve lost millions of gallons of water at our watering system, when they break pipes trying to get a drink, then just let it run,” Ladd said. “We’ve been broke into—everything we’ve owned has been stolen at least once.”

He said he spends 50 percent of his time checking fences, gates, and water.

“I shouldn’t have to do that every day. I’ve quit fixing all the interior fences and I just check the perimeter fence, keep cattle out of the highway or in Mexico. That’s what my whole fence deal is, just keep them on the ranch,” he said.

Not being able to have interior fencing has increased his costs, as he cannot selectively breed his best stock. All his bulls have to be top grade, and he can’t keep cows in separate pastures.

He said the peak volume of illegal immigrants crossing his land was during the decade from 1995 to 2005.

“They were catching an average of 300 a day just on our ranch, for 10 years,” he said. “[Then in 2016,] when Trump got elected, it just stopped overnight. And it was the threat of what he said he was going to do. It took them [the cartels] a year to figure out that what Trump was saying was unenforceable because Congress won’t support Trump. So here they come again.”

Ladd estimates he gets around 10 to 12 illegal aliens on his land a day now, and he says Border Patrol catches about 50 percent of them.

“And that’s better than it used to be. They used to catch one in six,” he said. “I don’t know of any asylum seekers. I’m sure there might be a few. But they’re young men, Central Americans, and whether they’re legitimately coming to work or are they scouting for something else, coming to work for the cartel in America, I don’t know.”

border security
A motion-activated trail camera set by the Cochise County Sheriff’s Office captures an illegal alien in camouflage clothing and carpet shoes on Feb. 17, 2017. (Courtesy of Cochise County Sheriff’s Office)
Ladd said the illegal aliens he sees wear full camouflage gear, as well as carpet shoes to eliminate their tracks. “They all have cellphones. It’s very sophisticated,” he said.

“The border isn’t about immigration anymore, it’s about smuggling. And smuggling transforms into power and money. When I say the border is about smuggling and money and power, Congress is right in the middle of that, because [they] don’t want to hurt the cheap labor. Corporate America’s getting rich over the deal, paying everybody under the table.”

Ladd said Congress could easily fix the problem. “We want people coming, but we can’t have this major invasion with people that we have no idea what they are,” he said.

A Replicable Formula
Dannels is proud of his county’s success so far and encourages other sheriffs to pick up the formula and run with it. He has also shared it with the Department of Homeland Security, of which he is on the advisory council.

“The biggest thing we’ve got going in Cochise County is the will and the action to back it up,” he said. “I mean … when you see people scared to leave their homes, you see people victimized at the hands of the cartel, to hell with that, we’re going to go after them. We got to do something different. I take that seriously. If I expect Washington, D.C., to fix it, I’m in trouble. And I’m not picking on them; they move like snails.”

Dannels said although statistics show a decrease in crime in his county in response to the program, it’s the feedback he gets from the ranchers and residents that he’s most proud of.

“The ranchers and the farmers and the citizens living in the rural areas that have been impacted the last 25 years, will tell you it’s the best it’s been in almost 30 years. That is the best report card you can get,” he said.

“We didn’t put politics into this. Politics has no business in policing. We don’t care what your political affiliation, we care about how we can enhance that quality of life for the citizens of Cochise County. And we did that.

“You’ve got to establish the will and go for it, and don’t look back.”